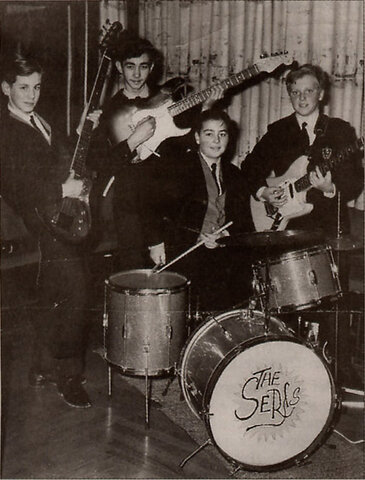 Rock from Duncan BC

The Serfs started when four elementary school friends got together and pretended to play the hit songs of the day. They listened to and were influenced by; the Kingsmen, the Surfaris, The Ventures, Buddy Holly, Paul Revere and The Raiders, the Beatles and the Dave Clark Five to name a few.

They chose their name 'The Serfs' as a word play on the surf music genre that was popular at the time and used 'slaves to their music' as their motto. Eventually, with the help of formal music lessons, the boys began to create their own music, however, due to their young age were not taken seriously.

Things changed when The Serfs' age became the reason why they were not accepted to compete in the Battle of the Bands hosted by Mayfair Mall. Their manager, Dorothy James (also two of the boys' grandmother) saw a publicity opportunity and contacted the local newspapers and radio stations to make the public aware of the situation.

The articles and news stories that followed in support of the band launched The Serfs into the musical spotlight. The Hudson Bay Company gave the Serfs their first 'big break' by hiring them to play at their 'Back-to-School a-Go-Go'. The Serfs went from relative obscurity one week to the next sharing the stage with; The Wailers, The Viceroys, The Take Four, The Blues X Five and the Emotions. This was a defining moment in the band's history.

At the time Lee Paterson was 10, his brother Dean and Paul Erickson were 13 and Tim McMorland was 12. This was the beginning of a short but impressive career that included engagements all over Vancouver Island and the lower mainland, two TV appearances on CHEK TV's Club 6, a Record offer from PIERCE Records in Tacoma, a valiant attempt by Dorothy James to get the boys on the Ed Sullivan Show and several scrapbooks of musical memories.

After 3 years of being active in the local music scene and with their sights set on more ambitious opportunities, The Serfs suffered a setback when Tim McMorland and his family moved out of town. Even though a replacement was found for Tim the magic of the original foursome had been lost and The Serfs eventually disbanded.

All four members of the original band continued with their own musical projects. Lee and Dean formed numerous bands over the years and are still playing together. Paul retired his Fender Jazz bass years ago and Tim is jamming with Jimi.

The Serfs were a major contributor in defining the emerging Vancouver Island Music scene of the 60`s.