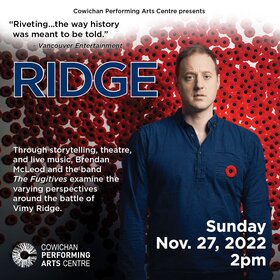 Music: Folk / Celtic / Latin / World, Pop / Rock / Indie Theatre: Drama
Often called the “battle that made Canada,” Vimy Ridge resulted in over 10,000 Canadian casualties. Through direct storytelling, theatre, and live music from Brenden McLeod and the band The Fugitives, Ridge examines misconceptions and varying perspectives around the battle, while drawing parallels to other formative events in our nation’s past.

Featuring inventive musical interpretations of WWI soldier songs throughout, Ridge probes difficult yet necessary questions about how and why we grieve. A vivid, kinetic ride through history, as well as an intimate, personal examination of our connection to the past, Ridge is a visceral work that passionately argues against the exploitation of young lives.

other sites: rdio
To record their first release in three years, Vancouver-based indie folk collective The Fugitives was just hoping to stay home. After eight years of touring Canada and Europe, they’d drained most of the romance out of cramped cars, long roads, and eating sandwiches out of gas station refrigerators. So they surprised themselves by trucking three t... more info
Submit info on this show to our admins