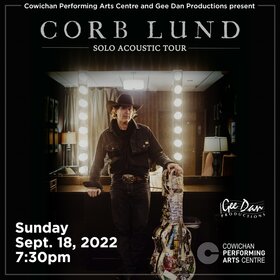 Corb Lund has received multiple CCMA, JUNO, and international award nominations and wins. A rural Albertan hailing from the foothills of the Rocky Mountains with a long family lineage of ranchers and rodeo people, Lund is about as authentic as they come. Embracing both his Western heritage and his indie rock past through his music, Lund has been known to filter a range of cowboy themes past and present through his unique lens-from rough-and-tumble tales of lawless frontier saloons to the somber realities of running a modern family ranch.

The Corb Lund Band has progressed into a blazing roots-country band fresh off record deals with revered labels Stony Plain Records of Canada and UK's Loose Music. The chameleonic Lund, who was for 12 years the leader of popular indie rock band The Smalls, is now a little bit country and a little bit rock 'n' roll. The band was recently nominated fo... more info
Submit info on this show to our admins