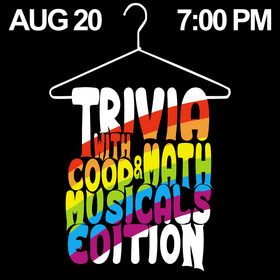 Theatre: Comedy, Improv
A Riot exclusive, join Math and Coop as they delve into the silly intricacies of stage musicals! Do you know what the hills are alive with? How many Cats can you name? Come match wits with the witless Math and Coop! Teams of up to 4 people for $10, reservations recommended.