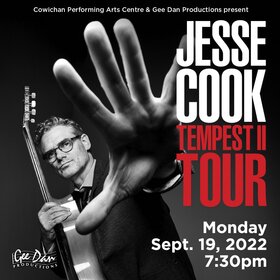 An accomplished guitarist, producer and equally prolific film maker, Jesse Cook has evolved his talents to create experiences that delight audiences both in concert, and online. With over 11 JUNO Award nominations (winning Instrumental Album of the Year in 2001), a Gemini award and 10 platinum and gold studio albums, Jesse Cook is a global-guitar virtuoso who has honed his incredible skill as a composer, producer, performer and more.

Fiery, passionate and percussive guitar work, Moorish rhythms and smoldering onstage charisma – it can only be Canada’s Juno Award winning Jesse Cook, who returns to Victoria for JazzFest International. Most recently Jesse has been nominated for two 2008 Juno awards, for his 2007 release Frontiers (World Music Album of the Year) and for the inc... more info
Audio: Jesse Cook
Submit info on this show to our admins