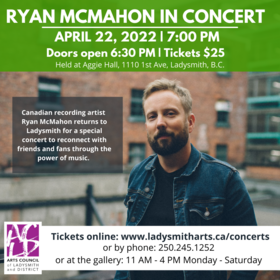 Music: Country / Bluegrass / Rockabilly, Folk / Celtic / Latin / World, Pop / Rock / Indie
Singer-songwriter Ryan McMahon comes to Ladysmith for one night with a performance at Aggie Hall on Friday April 22, 2022 at 7pm. Bring your dancing shoes as you bop to folk, rock, roots, country and Americana. Plus hear new music from Ryan from his new album One More Fire.

Whether it has been as a solo act, or with the harmony-driven trio Lion Bear Fox, Ryan McMahon has toured the globe, giving memorable performances everywhere he's been for over 20 years now. Having shared the stage with everyone from Burton Cummings & Buffy Ste. Marie to Mother Mother & Aaron Pritchett, Ryan has proven himself to be as adaptable as anyone in Canadian music. His new single, "One More Fire" will be out on Feb 4th of 2022, and was produced alongside a fleet of top-shelf talent inside the walls of Vancouver's venerable Bryan Adams-owned Warehouse Studio. After nearly two years of forced reflection and re-calibrating, Ryan is ready to get back on the road to make those connections to friends & fans that he holds so dear once again, through the power of music.