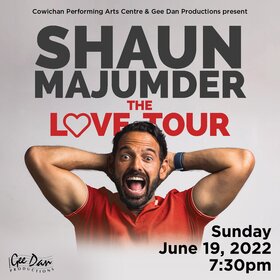 Theatre: Comedy
Get ready to laugh with one of the rock’s favourite sons. Shaun Majumder makes a return visit to Cowichan with his unique brand of adult comedy. As he says, “This is not the CBC.”

Gemini award-winner Shaun Majumder is an actor, writer, comedian, and social entrepreneur from the small town of Burlington, Newfoundland and Labrador, Canada. He starred in the Farrelly Brothers Fox comedy Unhitched in 2008 before his Comedy Central Presents special debuted; he’s since appeared on 24, Cedric the Entertainer Presents, and was one of the principals and lead cast members on This Hour Has 22 Minutes for 14 years.