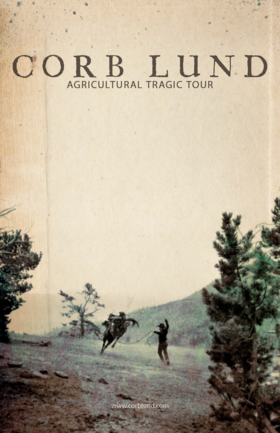 Music: Country / Bluegrass / Rockabilly, Folk / Celtic / Latin / World
**“Corb Lund is Western Canada’s favourite literary six-strong son.” - Beatroute** Spend a rollicking evening with the iconic Corb Lund, who puts on a show you won’t soon forget. Corb's music reflects his Western heritage and rock and roll roots. His distinct blend of Americana-meets-roots-meets-alt-country has attracted accolades from critics in Canada and the U.S., who have called him “one of the best contemporary country songwriters” (Popmatters) and one of the “10 New Country Artists You Need to Know” (Rolling Stone Country).

The Corb Lund Band has progressed into a blazing roots-country band fresh off record deals with revered labels Stony Plain Records of Canada and UK's Loose Music. The chameleonic Lund, who was for 12 years the leader of popular indie rock band The Smalls, is now a little bit country and a little bit rock 'n' roll. The band was recently nominated fo... more info
Submit info on this show to our admins