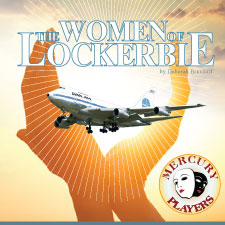 Event Archive - The Women of Lockerbie:

On December 21, 1988 PanAm Flight 103 crashed onto a residential street in Lockerbie, Scotland. Seven years later “The Women of Lockerbie” are struggling to come to terms with the fallout from the Lockerbie Bombing. In their effort to find closure they come into conflict with the rule-bound American administrator who is in charge of the storage and disposal of all items that were held for the investigation of the bombing. An American couple come to Lockerbie to try to find something of the son that they lost.

The play is a fictional work inspired by the Lockerbie Laundry Ladies who laundered the passengers clothing so that it could be returned to the families. It is a one act play that is presented in the Greek style. Adrian Ingham (Almost Maine, Anatomy of Grey), Bronwen Thorburn (in her Mercury Theatre Debut), Jan Ovans (Shawnigan Players regular), George Jones (in his Mercury Theatre Debut) and Lori Appleton (Almost Maine, Anatomy of Grey) have been cast as the main players. The chorus is played by Leslie Sanchez, Jennifer Cleough, Megan Bourns, Lisa Read, and Bethanny Brooks.