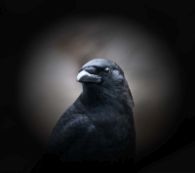 Visual Arts: Photography
Richard first starting shooting in 1970. Since then he has taken thousands of photographs, some of which have appeared in magazines, books, brochures, posters and book covers.

These photographs of crows, taken on Malcolm Island, BC, reflect his love of portrait photography. Many scientists think that corvids - the family of birds that includes crows, ravens, rooks and jays - may be among the most intelligent animals on earth, based on their ability to solve problems, make tools and apparently consider both possible future events and other individuals' states of mind. These images capture that intelligence in their eyes.