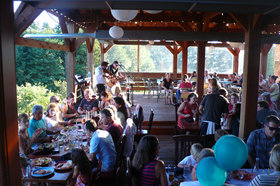 Merridale's legendary Sunday Pizza Nights return for 2019 with a fresh line-up of live local entertainment and delicious farm-fresh brick-oven pizza, starting on Father's Day and running every Sunday throughout the summer.
There will be two seatings each night - one at 5pm and one at 7pm. There will be a set of live music with each seating.

Kristina is a Calgary born singer/songwriter. She wrote her first song at the age of eight and recorded for her first time in a little garage four years later. She then went on to work with producer Greg Gunhold and was nominated semi-finalist in the ISC (International Songwriting Competition) at the age of 15 two years in a row for her song "From ... more info
Submit info on this show to our admins