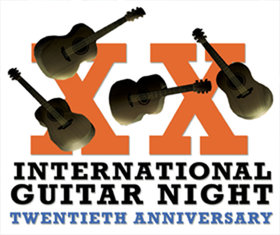 Music: Country / Bluegrass / Rockabilly, Folk / Celtic / Latin / World, Jazz / Blues
“IGN owes a debt to one place that isn’t LA, Paris or New York – it's Duncan, one of the first cities to embrace the project contributing greatly to its success!” – Brian Gore

Each year, International Guitar Night’s founder Brian Gore invites a new cast of guitar luminaries from around the world for special concert tours highlighting the diversity of the acoustic guitar.

This year IGN celebrates 20 years of touring North America. For the Special 20th Anniversary Tour, Brian has put together his most eclectic lineup yet: Guest host Mike Dawes from England (Voted the ‘Best Acoustic Guitarist in the World’ by MusicRadar & Total Guitar Magazine) and his incredible two-hand contemporary style is joined by Germán López and his sweet, high-pitched timple from the Canary Islands; electrifying jazz virtuoso Olli Soikkeli from Finland and Hawaiian Slack Key master Jim Kimo West.

Mike Dawes
Hailed as one of the world’s finest and most creative modern fingerstyle guitar performers, Dawes' acclaimed solo music has gained over 80 million hits on popular video sharing sites and since the release of his debut album in 2013 he has toured almost every continent on the planet, with an average of 150 concerts per year. Mike was named Best Acoustic Guitarist in the World in both 2017 & 2018 by Total Guitar Magazine/MusicRadar.

Germán López
The greatest living master of the five-string Spanish timple and a global ambassador for the music of the Canary Islands. He was born in Gran Canaria and studied music at Las Palmas Conservatory. He was brought up with a “timple” in his hands which has made him one of the most well-known timple musicians in the world. The sheer beauty of the sound of the tiny instrument is subtle and expressive in Lopez’s touch.

Olli Soikkeli
Born in Nurmes, Finland and based in NYC, Soikkeli was introduced to the music of great Django Reinhardt and Gypsy Jazz, which has been his primary focus since. Olli played in jazz clubs and festivals across Finland, and toured Europe with Sinti Guitarist Paulus Schäfer. At only 28 years old, he’s already played with notable artists such as Bucky Pizzarelli, Stochelo Rosenberg, Tommy Emmanuel, Andreas Öberg, Cyrille Aimee, Antti Sarpila and Marian Petrescu.

Jim Kimo West
Jim Kimo West is recognized as one of the world’s top “slack key” guitarists and brings his own unique musical perspective to this great acoustic guitar tradition. He is a recent nominee in the 61st Grammy Awards, a winner of the 2008 Hawaii Music Awards, a three-time Na Hoku Hanohano (the Hawaiian “Grammy”) nominee and a two-time winner of the LA Treasures Award for his contributions toward the perpetuation of ki ho’alu.