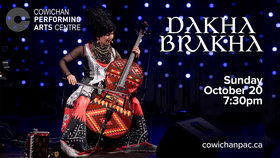 Music: Folk / Celtic / Latin / World
Folk, world, punk, rap ... it all blends into the unique sound of DakhaBrakha. A quartet of accomplished multi-instrumentalist and vocalists from Kiev whose tastes, talents and tunes cross multiple borders, ethnicities and eras to create an astonishing trans-cultural sound rooted deeply in traditional Ukrainian folk-song.

When the curtain rises, and the lights go up - you see the Ukrainian band sitting on stage and the first thing you notice is their outfits.

It's quite a fashion statement and suits their unique and beautiful blend of traditional, Ukrainian folk music and punk rock — a sound they describe as "ethno chaos."

Created by avant-garde theatre director Vladyslav Troitskyi for productions at the Kyiv Center of Contemporary Art in 2004, DakhaBrakha (which means give & take in old Ukrainian) retain elements of the dramatic in their elaborate garb and compelling performance style.

The group’s music is based on songs collected in Ukraine villages by folklorists, then infused by the global musicality of its four extremely talented and urban-dwelling musicians whose influences include American pop hits and dance music, African rhythms, Indian tabla, and Jamaican dub, among many others. With percussion and accordion as key elements, they play an array of Indian, Arabic, African, Russian and Australian traditional instruments.

A DakhaBrakha concert set list could see the foursome seamlessly move from a Crimea-based love song in the “Tatar language” to a tune of Carpathian origin sung in a rap style, a striking Middle Eastern-inspired piece, a touch of reggae, bird calls, Balkan yips and close harmonies, to traditional call and response singing.

Totally unique and utterly mesmerizing, it’s no wonder they win fans everywhere. Come and see for yourself why DakhaBrakha is a global phenomenon.