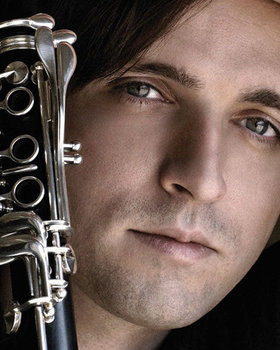 The Noteworthy Classical Concert Series season finale ends The Bergmann Piano Duo performing a dazzling programme of some of the most beloved works for the clarinet and piano with the multi-award-winning virtuoso clarinetist Jose Franch-Ballester. Don't miss this master of technical clarinet wizardry and his effortless musicianship and infectious enthusiasm.

A native of Moncofa, Spain, Jose Franch-Ballester is one of the most promising clarinetists of his generation. In 2008 he received the highly coveted Avery Fisher Career Grant, and in 2007 was selected for a Carnegie Hall Professional Training Workshop with Emmanuel Ax and Richard Stoltzman. He has played with artists such as Charles Wadsworth, Arnold Steinhardt, Warren Jones, Ida Kavafian, Frederica von Stade and David Shifrin, the Saint Lawrence and Jupiter String Quartets, and as a soloist with orchestras such as Orquesta de la Radiotelevisión Española, I Musici of Montréal and Orchestra of Saint Luke’s. Mr. Franch-Ballester is in demand at numerous festivals, including Chamber Music Northwest, the Skaneateles Festival, the Bridgehampton Chamber Music Festival, Music from Angel Fire, Usedomer Musikfestival, and Verbier Festival. He graduated from the Conservatoy Superior of Music Joaquín Rodrigo and entered the Curtis Institute of Music. He is a Backun Clarinet Artist and performs on MoBa Cocobolo Clarinets.

Joyful and energetic music including a set of Beethoven-Variations for piano duet, to mark his 250th anniversary, as well as pieces by Bach and some Spanish/Latin music. Should this 10:30am performance sell out or seats become limited, we are considering adding a second show the same day Thursday, November 5 at 1:00pm. If you would like to be ad... more info
Submit info on this show to our admins