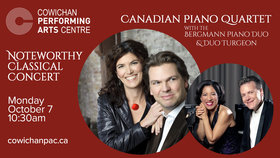 Come and join us for the season opening performance of Noteworthy Classical Concerts with The Bergmann Piano Duo and Duo Turgeon with a musical celebration featuring two pianos, eight hands and forty fingers.

The Canadian Piano Quartet, made-up of Anne Louise-Turgeon, Edward Turgeon, Elizabeth and Marcel Bergmann will join together in a playful pianistic display featuring works for multiple pianists. Both duos are laureates of the Dranoff International Two Piano Competition and have enjoyed collaborating over the years at various festivals and on tour. They will explore a range of delightful and familiar repertoire, with works by Saint-Saëns, Bach, Rossini and Gershwin.