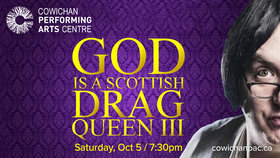 5 stars out of 5 – Edmonton Journal

God is a Scottish Drag Queen 3 features Delamont, playing God, one of the world’s most famous deities, clearing a few things to up with the people she created. A good-humoured, big-boned girl, Delamont’s God towers on stage at over six-feet tall. She is barefoot and decked out in a floral dress and pearls riffing on cultural absurdities and she doesn’t hold back: “I gave you tools that you don’t use. For instance, not one of you knows how to interpret modern dance!”

This all new installment is sure to have you in gut-splitting laughter as Delamont's portrayal of God lets off a bit of steam when it comes to what humans have been doing, or not been doing ... no one is off the hook! Audiences across North America have fallen in love with this Scottish deity and the third chapter has proven to be the most popular!

In an interview with the Edmonton Journal, Mike Delamont answers a key question ...

Your fringe show this year is God is a Scottish Drag Queen III – how is part 3 different from parts 1 & 2? What is the overarching story arc between the three shows?

In part one, I thought I was answering all the big questions that people had ever wanted to ask God. Turns out I wasn’t even close, so in part two I asked people online what else they wanted to know, and answered the top 7 questions. In part 3, I answer all of the strange questions that I have been asked by folks over the past few years. The story through all three is spending an hour with God. Part three we get to discuss the craziness of religion, people and the world…