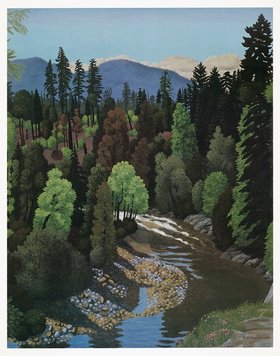 Sun. December 1st 2019 - Fri. January 31st 2020 @ The Gallery at the Cowichan Performing Arts Centre Duncan BC (All Ages)
The gallery is open for public viewing one hour prior to Theatre show times. Private viewing can be arranged by contacting the artist directly.
Opening: Thursday 1st January 1970
Free

Born in North Vancouver in 1913, E.J. Hughes studied under Charles H. Scott, Jock Macdonald and Frederick Varley at the Vancouver School of Applied Art and Design. After graduating in 1933, and following two years of post-graduate studies, Hughes undertook print and mural projects with fellow art students. In 1939, Hughes joined the military and spent six years expanding his artistic skills as an official war artist. After his discharge from the military in 1946 he returned to the west coast of Canada, settled in Shawnigan Lake and Duncan on Vancouver Island with his wife Fern and began a lifelong study of the province and its landscape as a professional artist. This show depicts images of the Cowichan Valley. “I have painted in the Cowichan Valley for fifty years and it it the most beautiful place on earth” Dr. Edward James Hughes