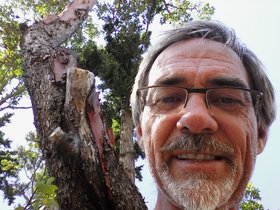 Sun. September 1st 2019 - Thu. October 31st 2019 @ The Gallery at the Cowichan Performing Arts Centre Duncan BC (All Ages)
The gallery is open for public viewing one hour prior to Theatre show times. Private viewing can be arranged by contacting the artist directly.
Opening: Thursday 1st January 1970
Free

Visual Arts: Woodworking
Todd was born in Humboldt, Saskatchewan and at the age of 15 moved to God's Country (VancouverIsland). He graduated in 1981 at the Cowichan Senior Secondary School and soon after was schooled in Drafting at Malaspina College. He later owned and ran a drafting business working on house plans which came to an end in 1990 for medical reasons. Todd has always loved working with wood, so he decided to take a furniture making course and soon after he graduated opened a custom furniture shop in the Cowichan Valley. It served customers from Victoria to Parksville until the recession of 2008 forced him to close his doors. In 2011, Todd was hired as a furniture maker at Live Edge Design and making artistic west coast furniture which he is still happily doing as his main job. In his spare time since 2013, Todd creates artistic mirrors, doors and nature inspired wall art from the scraps of wood he collects from his job at Live Edge Design. He sells his creations both online and locally in art galleries and artisan stores. Todd is happily married to his wife Brenda, and they live in Duncan. He enjoys nature and many of his carvings show that. He is proud that the wood he uses is salvaged trees from Vancouver Island.

24 years of furniture making and designing in the Cowichan Valley. Presently working at Live Edge Design and using the off cuts to make unique wall art, carvings and wall mirrors. Has a showroom of 15 or more live edge mirrors and wine racks and will make custom mirrors as well. more info
Submit info on this show to our admins