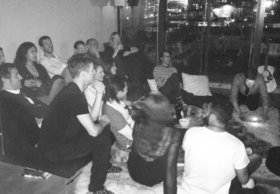 Film:
Join our community of big-hearted, socially and environmentally activated folks for a movie meetup. This is our chance to watch an acclaimed documentary and have some good solid conversation about the film and the issues that matter. Meet new people and see familiar faces twice a month.

This week, we'll screen the award-winning doc CHASING ICE, an extreme adventure by a National Geographic photographer who begins as a climate skeptic and transforms into a climate change activist as he and his team go to extreme measures to document the extreme retreat of the Arctic glaciers. The film isn't a bummer though - you'll be inspired by his tenacity and spirit, reminded what makes humans just so gd great.

Bring your reusable cup for tea. Popcorn will be served. Doors at 6:30pm, film starts at 7pm. Stick around for conversation after.

About the Film
Acclaimed National Geographic photographer James Balog is an extreme person. So when his climate skepticism gives way to a commitment to documenting the mass extinction of glaciers around the Arctic, he's extreme about that too. He and his team - The Extreme Ice Survey - set up time-lapse cameras on Arctic cliff faces, then check back annually to grab the data. Year after year, the photos they capture tell the story of a planet - our home! - warming fast; the glaciers and ice mountains retreat before our eyes. We also witness the heroic lengths Balog will go to capture this story. Brutal weather, four knee surgeries, extended periods away from his family: the guy won't quit. Which is lucky for us because the photos, and this film, are credited by many former climate deniers as the wake-up call they needed. Beautiful, captivating, disturbing, eye-opening, Balog's photos were captured from 2005-2009 and this film by Jeff Orlowski was released in 2012, and yet the urgency of this story is greater than ever.

Available in Canada only.