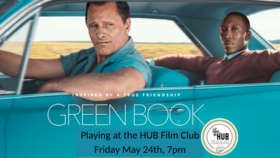 Film:
Come and watch a film at the Greatest Little Cinema in the Valley! Doors and the concession, serving hot buttered popcorn and treats, open at 6:30pm.
Admission is by donation at the door (suggested $5) or free with club membership.
MEMBERSHIPS ON SALE NOW - a new Membership Year is starting! Individual $25/ Family $55. All proceeds go to support the community centre – the HUB at Cowichan Station. Bring a pillow to put on your seat for extra movie-watching comfort!

SHOWING THIS MONTH is “Green Book”. A 2018 US production. Rated PG, 140 mins
FILM SYNOPSIS:
Winner of many awards, including 2019 Best Picture at the Academy Awards. This film takes its name from The Travelers’ Green Book, a travel guide published (1936–67) during the segregation era in the United States that identified businesses that would accept African American customers. Compiled by Victor Hugo Green (1892–1960), a black postman who lived in the Harlem section of New York City, the Green Book listed a variety of businesses—from restaurants and hotels to beauty salons and drugstores—that were necessary to make travel comfortable and safe for African Americans in the period before passage of Civil Rights Act of 1964.
Starring acclaimed actors Mahershala Ali as an African American concert musician and Viggo Mortensen as Tony, an Italian American employed to drive him around on a concert tour in the Deep South in 1962. Based on a true story, this film is produced and co-written by the real-life Tony’s son Nick, with Peter Farrelly directing.

See you at the movies!