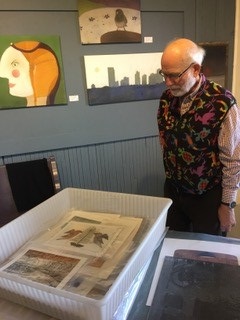 Sat. June 1st 2019 - Sun. June 30th 2019 @ The Gallery at the Cowichan Performing Arts Centre Duncan BC (All Ages)
The gallery is open for public viewing one hour prior to Theatre show times. Private viewing can be arranged by contacting the artist directly.
Opening: Thursday 1st January 1970
Free

Visual Arts:
Nick was born in the Dutch East Indies between two high volcanoes on Java. In 1942 he was 5 years old when his life changed at the start of World War II. His dad was called in the army to fight off a Japanese invasion and was not heard of until the end of the war. His mother, the baby brother and the two preschoolers were interned in concentration camps. After the Japanese surrendered in 1945 they were informed that dad was in Singapore. The family happily re-united and his mother decided to accompany his father to Sumbawa for a forestry research project.

In 1947 the family took a one-year leave to Holland, where the children aged 10, 9 and 5 went to school. His dad returned to Java in 1948 to resume his job and in 1950 mother and the two younger siblings joined him. Nick remained in Holland to finish high school and stayed with family friends. During his high schoolyears he became interested in nature, crafts and visual arts. His school class was encouraged by a young enthusiastic art teacher to experiment. Printmaking was interesting and for a while he considered to become a printer.

After high school he spent one year with his family on Java and joined his dad on several inspection trips to tree plantations across Java. Here he raised and collected tropical moths and butterflies. After his dad lost his job and the family returned to Holland in 1955, he decided to study geology. This suited his love for the outdoors and enhanced his observational skills. Required geological fieldwork was done in France, Italy, Austria and Spain. He graduated and married in 1962. After his army conscription he went to Canada and quickly found work in the oil patch with British American Oil as a well-site and field geologist. He joined the Geological Survey of Canada in 1971 to work in their new research laboratory in Calgary. After publishing several reports on surface and subsurface geology he returned to the university of Utrecht to get a Post Doctoral degree. He retired in 1996 to Kaslo, built his “dream“ house and volunteered as curator of the Langham Society.

During his career he took many night classes in printmaking at the University of Alberta in Edmonton and the Alberta Art College in Calgary before he got his own press. He joined the Calgary Artists Society and the Alberta Printmakers, selling his colored prints made from woodblocks, intaglio-etched zinc plates and rubberstamps as “NCMD Prints” in Holland and western Canada. He now lives in Ladysmith and recently completed the editions of 90 etched zinc-plates.