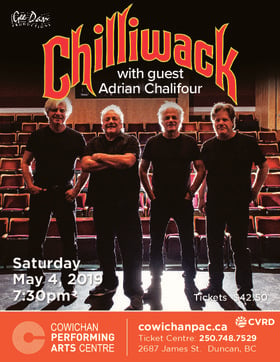 Music: Pop / Rock / Indie
Catch the legendary Bill Henderson with Chilliwack, the band you know and love when they return to Cowichan. It’s a night of classic rock reaching over four decades with hits like Whatcha Gonna Do, Communication Breakdown, Lonesome Mary, My Girl (Gone Gone Gone) - the list goes on and on.

Opening for Chilliwack is special guest Adrian Chalifour - front-man for Victoria's own Towers and Trees. This emerging singer-songwriter and guitarist recently just competed in the second season of The Launch on CTV. Chalifour has been performing for 15 years, including the last seven as the lead singer of Towers and Trees.

Don't miss the distinctive and timeless music of Chilliwack and one of the most promising up-and-coming talents in Canada, Adrian Chalifour, whose voice is "better than John Mayer's" according to Nile Rodgers from CTV's The Launch.

Rising out of the ashes of psychedelia in 1969, Canada’s legendary Chilliwack released 12 albums over a 15 year period producing numerous Canadian and international hits including “Lonesome Mary”, “Fly At Night”, & “California Girl” in the 70’s; and “My Girl (gone gone gone)”, “Whatcha Gonna Do” in the 80’s. All this work ... more info
Submit info on this show to our admins