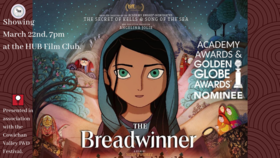 Film:
Catch a fabulous flic on the fourth friday of every month at the greatest little cinema in the valley!
Doors and concession open at 6:30 - hot buttered popcorn awaits you! Admission is free with club membership or by donation. Join the club for a small annual fee - $25 Individual Membership/ $50 Family (2 adults & up to 4 children). All proceeds go to support the HUB at Cowichan Station!

THE GIST of the film:
From executive producer Angelina Jolie and the creators of the Academy Award nominated The Secret of Kells and Song of the Sea, comes the multi-award winning animation based on Deborah Ellis' bestselling novel. Parvana is an 11-year-old girl growing up under the Taliban in Afghanistan in 2001. When her father is wrongfully arrested, Parvana embarks on a quest to find him and reunite her family.
Rated PG - Common Sense Media says ages 10+
Canada/Ireland 2017- 94m
Click here to view the trailer: https://youtu.be/p64O8KAHHaQ

See you at the movies!