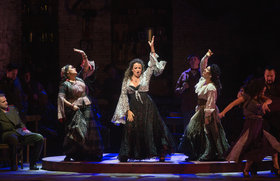 A met favourite, mezzo-soprano Clémentine Margaine reprises her remarkable portrayal of opera’s ultimate seductress in one of the most frequently staged operas in the world ... Carmen. She is joined by impassioned tenors Yonghoon Lee and Roberto Alagna as her lover, Don José with Omer Meir Wellber and Louis Langrée sharing conducting duties for Sir Richard Eyre’s powerful production.

Bizet’s masterpiece of the gypsy seductress who lives by her own rules has had an impact far beyond the opera house. The opera’s melodic sweep is as irresistible as the title character herself, a force of nature who has become a defining female cultural figure.