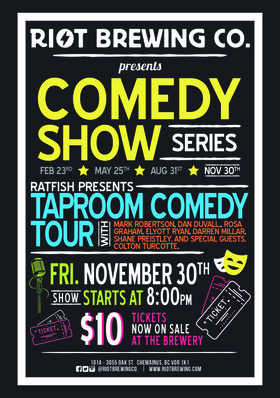 Join us for a night of laughs and hilarity at Riot featuring some of the best and brightest of Vancouver Island stand up comics featuring Mark Robertson, Dan Duvall, Rosa Graham, Elyott Ryan, Darren Millar, Shane Priestly and special guest, Chemainus' own, Colton Turcotte.
It is guaranteed to be a perfect marriage of craft beers and jokes.
Tickets are $10 and are available at Riot.