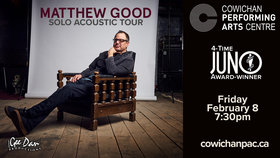 Fri. February 8th 2019 - Fri. February 8th 2019 @ Cowichan Performing Arts Centre Duncan BC (All Ages)
7:30pm - 9:30pm doors at 6:00pm
Tickets $45
Tickets at: Cowichan Ticket Centre, 2687 James St, Duncan, 250 748 7529, www.cowichanpac.ca
Presented by: Cowichan Performing Arts Centre
For over twenty years, Matthew Good has been a commander of the Canadian alt-rock music scene with his iconic sound and unprecedented songwriting. Since his 1995 debut album, Last of the Ghetto Astronauts, Good's music has been a staple of the airwaves. With sixteen albums to his name, four Juno Awards and twenty-one Juno nominations along the way, his latest album, Something Like A Storm debuted top five in the country, when it released last fall.

Matthew Good continues to rock the nation as one of Canada's leading alt-rock voices packing venues across the country and is also well known for his support of various causes, most notably his dedication to raising awareness regarding mental health issues and human rights.