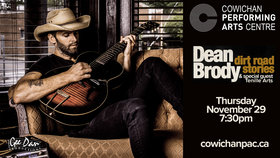 In a similar vein, his sixth album, Beautiful Freakshow, continues to keep listeners on the edge of their seats, unable to be sure of what is coming next. Just as the title of the album indicates, the album delves outside of the comfort zone of traditional country and is a fascinating mashup of Brody’s range of musical preferences, best epitomized by the title track, “Beautiful Freakshow”, which features a rap vocal contribution by Halifax native, Shevy Price and the mellow reggae vibe invoked from “Beautiful Girl”. And yet, the record still manages to simultaneously stay true to what many fans have come to love and expect from Brody, with traditional tracks destined to be classics, such as, “Time”, “8th Day” and “Blueberry Sky”, which features iconic country legend, Vince Gill on the guitar.

Joining Brody on tour is Saskatchewan's rising country music star, Tenille Arts. At 23. Tenille's accomplishments are impressive winning the 2016 SCMA Emerging Artist Award and the 2017 SCMA Album of the Year. Her newest recording, “Cold Feet,” has already reached #9 on the iTunes Canada Country Top Songs chart and her first full-length album “Rebel Child”, released in October 2017, debuted at #2 on the iTunes Canada Top Country Albums Chart, #12 on the All-Genres Chart, and #34 in the United States.