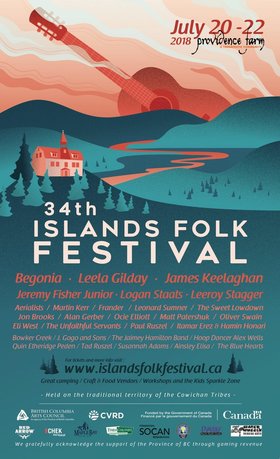 Music: Country / Bluegrass / Rockabilly, Folk / Celtic / Latin / World, Jazz / Blues, Pop / Rock / Indie
The Cowichan Folk Guild will proudly present the 34th Islands Folk Festival July 20-22 2018 at Providence Farm in Duncan, BC. Music lovers from all over Vancouver Island and the Gulf Islands are invited to join this celebration of music, featuring all the best elements of a homegrown folk festival.

James Keelaghan is one of the brightest stars on the world folk scene today. He's earned international acclaim for his song writing and performances and has taken main-stage at some of the most prestigious festivals in the US, England, Australia, Denmark, and Hong Kong. At home in Canada, he's a Juno award winner (and three-time Juno nominee) who's... more info

Fueled By Wine and cigarettes this former Staggers front man is back to grab you by the balls and make you fall in love with his music, when your influences include Steve Earle , Ryan Adams , The Ramones , The Velvet Undergound , The rolling Stones and The blacks Halos to name afew, you can only imagine the sound that ensues. With a promising live ... more info

Ocie Elliott is musical duo Jon Middleton and Sierra Lundy from Victoria, B.C., Canada. The two have come a long way in a short time since a chance encounter in a Salt Spring Island café led to a spark, collaboration, and their ultimate partnership in music and beyond. That was hardly two years ago, and Ocie has been busy, releasing both an EP and... more info

Oliver Swain, a Juno and WCMA nominated Americana and Folk-Noir musician from Victoria BC spent a dozen years in some of North Americas most loved roots bands(Outlaw Social, The Duhks, The Bills) before releasing 'In a BIG MACHINE' in 2011 to rave reviews “Oliver Swain's brilliant vocals and genre-agnostic style make 'In a BIG MACHINE' one of the... more info

other sites:
PAUL RUSZEL Paul was born in Toronto on April 16, 1953. He is an accomplished singer-songwriter who, over the course of the last 40 years, has written hundreds of songs. Paul embraces the old-time storytelling tradition, where his lyrics are as much poetry as they are music. He is a mainstay of The Islands Folk Festival where he has been ... more info

John Gogo is a singer/songwriter from Nanaimo on Vancouver Island on the West Coast of Canada. John blends pop sensibilities with traditional style North American roots music. Some people point out country inflections. Others note the influences of folk. John Gogo has released 3 full length albums and toured Canada several times. He has written a n... more info

“There is a spark and absolute joy in watching Tad Ruszel perform. That night at the bar, I found myself entranced at times, clapping and singing along at others. His gift for music reaches far beyond the ordinary; it’s like he melts with the audience and you’re in for the ride together. Then you pop out the other side rejuvenated yet totally... more info

Vocalist Susannah Adams is widely recognised as a dynamic and versatile musician who is consistent in developing her capacity within the jazz genre. Adams has worked with some of Canada’s finest musicians, including Miles Black, Oliver Gannon, Daniel Lapp, Joby Baker, David Restivo and Phil Dwyer. Adams is fast becoming one of Vancouver Island... more info
Videos:

You Make Me Feel Like A Natural Woman - Cover by Maureen Wa...