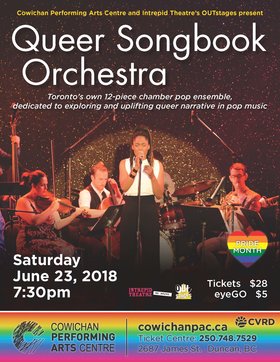 Formed in 2014, the Queer Songbook Orchestra is a 12-piece chamber pop ensemble of queer and allied musicians, dedicated to exploring the LGBTQ2S backstories and personal narratives in the last century of popular music. Since inception, they have been invited to perform across Canada, earning high praise for their unique mission and original approach.

Their performances are described as a “look back at the last century of popular music with the queer lens intact,”. With a combination of music and storytelling, the QSO sheds light on revelations such as the contradiction of a public which adores the art but shuns the artists and examines resilience in song through the courage of the songwriter. The audience can expect to be taken on a musical and narrative journey through the past hundred years of popular music – a time during which the lives of many queer artists were lived in a “hush hush” fashion.

On June 15, 2018, the QSO are releasing their new album ANTHEMS & ICONS, and Cowichan concert-goers will be some of the first in Canada to hear music from their new album live in concert.

In addition to music from their latest release ANTHEMS & ICONS, the performance will also feature a host of recognizable songs – such as Lesley Gore’s You Don’t Own Me, k.d. lang’s Constant Craving, Joe Meek’s Telstar, Bronski Beat’s Smalltown Boy, and work by Elton John, Billy Strayhorn, Ani Difranco and more.

The QSO got their start at the now defunct Videofag, in Toronto's Kensington Market, and have gone on to play many of the top performing arts festivals throughout Canada, including Luminato (Toronto), High Performance Rodeo (Calgary), PuSh (Vancouver), and Canada Scene (National Arts Centre). They have been part of Buddies in Bad Times 'Queer Pride' programming for the past four years, have been in residence at the Banff Centre for Arts & Creativity, and been featured on the CBC program 'Q'.

The Queer Songbook Orchestra members are: