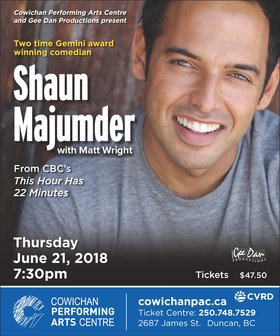 Theatre:
Shaun Majumder is one of Canada’s top comedians. A cast member on CBC's This Hour Has 22 Minutes, Shaun provides viewers with a brilliant mix of parody, sketch comedy, and scathing editorial commentary. Equally at home on stage as he is in front of the camera, his incessant wit never ceases to entertain.

A Gemini Award-winning actor/comedian Shaun Majumder hails from Burlington, Newfoundland (population 350). A former member of the famous sketch comedy group The Bob Room, Shaun’s clever and unique style of comedy earned him Gemini nominations for The Comedy Network special On the Edge With Shaun Majumder, as well as the Halifax Comedy Festival.

He has starred in the Farrelly Brothers Fox comedy Unhitched in 2008 before his Comedy Central Presents special debuted; he’s since appeared on 24 and Cedric the Entertainer Presents. His documentary series Majumder Manor told the story of his dream to transform his home town into a high-end, sustainable tourist destination and ran for 2 seasons on the W Network. Film credits include Harold and Kumar go to White Castle, The Ladies Man, Pushing Tin, Purpose and Bob Funk, and he’s hosted the Just for Laughs Comedy Festival TV series for three seasons.

Special Guest Matt Wright:
Matt Wright is an award winning stand-up comedian, writer, actor, and director. He has performed at the Just For Laughs Comedy Festival, Halifax Comedy Festival and has headlined comedy clubs from St. John's to Vancouver.

Matt was a national finalist at the Just For Laughs Homegrown Competition, a national semi-finalist in the Sirius XM Canada's Next Top Comic challenge, and was named "Best Comedian" by Overcast Magazine in 2014 and 2015.

Matt is currently a writer on This Hour Has 22 Minutes and has appeared on The Debaters. His album Vasectomy Baby went to #2 on the* iTunes Canadian Comedy* charts and can be heard frequently on SiriusXM.

Also an accomplished actor/director, Matt's short film "Wife and Death" was an official selection at multiple film festivals and earned him the "Best Emerging Filmmaker" award at the 2016 Nickel Film Festival.

When I Grow Up
by  Wanda Fraser