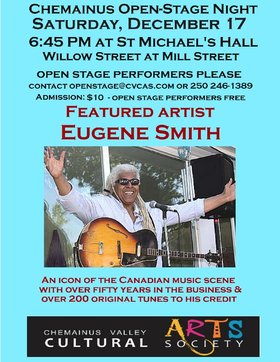 Music: Jazz / Blues
The monthly Chemainus Open-Mic and Concert event will feature Eugene Smith as the main, featured performer. Eugene Smith is an icon of the Canadian music scene, with more than fifty years in the business and over 200 original tunes to his credit. The Eugene Smith concert will follow the regular "open-mic" performances during the first half of the show.

Four string tenor guitar, djembe, harmonica, Jew's Harp, finger piano and trumpet are some of the instruments Eugene Smith uses to deliver a humorous and entertaining show. Playing for over four decades, Smith has shared the stage with some of the greats: Bo Diddley, John Lee Hooker and Gordon Lightfoot to name a few. Eugene will be appe... more info
Submit info on this show to our admins