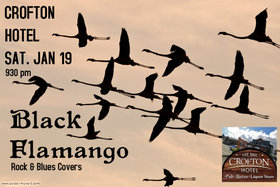 Music: Tribute / Cover
Rock'n in the Free world with BLACK FLAMANGO at the Croftin Hotel. Come on down and party!

Nanaimo Based Rock / Blues cover band. Over 60 tunes ready to play at any bar, any party for the right price. We cover anything from Talking heads, Stevie Ray Voughn to Hendrix, the Cars, Wide Mouth mason, Age of Electric, I mother Earth & Kenny Wayne Sheppard. We also touch on some Beatles, The Doors and Even the Hip. So if you want to hav... more info
Submit info on this show to our admins