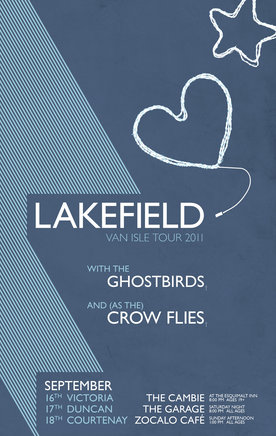 From the first cry to the final breath, Lakefield’s story has been a humble one, co-authored by five complicated friends. It’s one well known by anyone who has ever longed to live and love through music: the euphoria of a perfectly executed decrescendo; the long fall on to deaf ears; the big-kid, major-label ambition, radiating energy into the ... more info

other sites: youtu
Formed in June of 2009, The Ghostbirds are an original folk duo/band out of Victoria BC. Described as "wild fairy music" and "ancient celtic meets an apocalyptic future". The Ghostbirds delve into the mystic and take you with them on a journey through their eerie and soaring siren songs. Influences: Mother Mother, Bjork, Radiohead, Iron&Wine, Mo... more info

As the Crow Flies is a band that can fill a room with living sound. Their poetic lyrics, swelling harmonies, tight arrangements and skilled improvisational jams have been opening the hearts and enervating the feet of audiences for over a year. Playing packed shows to extremely appreciative crowds, in venues as seemingly disparate as the Victoria Fo... more info
Submit info on this show to our admins