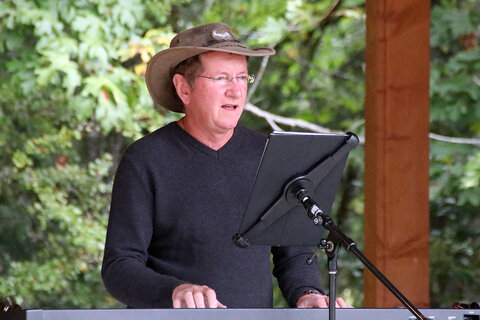 Although classically trained, Phil Newns is better known as a jazz pianist, vocalist, bandleader and educator. He studied music at the University of Natal in South Africa and later at the University of Toronto. Phil spent many years on the cabaret circuit as a professional musician in South Africa and neighbouring African countries including Swaziland, Bophuthatswana and Botswana. In 1990, as Canadian Champion, Phil represented Canada at the Yamaha International Organ Festival in Mexico City that year placing 6th in the world. His extensive professional career credits include: the 1991 British Columbia Winter Games score, festival producer and corporate entertainer and music director of many major theatrical productions, most recently “Crazy For You”, “Mary Poppins”, “The Addams Family”, “The Boyfriend”, “Fiddler On The Roof”, “In The Heights”, “Phantom Of The Opera”, and “Les Miserables”. Phil has also served as co-chair for the Westcoast Concert Choir Festival held at Brentwood College, which is affiliated with Musicfest Canada. His jazz bands, choirs and private students have achieved top honours in festivals across Canada including annual provincials and nationals. Phil is currently the “Head of Music” at Brentwood College School.