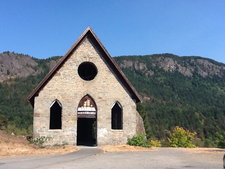 In 1870 Father Rondeauld with native helpers built the stone church on Comiaken Hill. It is known as the Butter church as he paid his helpers with funds raised from the sale of butter from his dairy herd on the mission's farm.

To his dismay, the church was only used for ten years as Bishop Demers orderd a new church be built on land with clear title. The verbal agreement authourizing the construction of the church on Indian land was not sufficient for the bishop. The stone church was abandoned an repeatedly vandalized. It developed a reputation as the haunted church among the natives. Repairs were attempted in 1922 and again in 1958 and 1980 when it was rebuilt as a cultural centre but the church rapidly reverted to the ghostly vandalized structure prominently located on Comiaken Hill.

The haunted church has a rich oral history. This was captured in 1931 with a report in "Ripley's Believe It or Not" They described "The church of no services...in which no congregation has ever gathered." According to Ripley, "the Indians will not go near (it) because all those who actually built it died mysteriously." In this case, Believe it Not. Services were held in the church for ten years, 1870 to 1880.