Up on The Hill

In a large music room “up on the hill” in Mill Bay, there has been a core group of men jamming for over 15 years; and many other men, women, and youth have come and gone throughout the years playing and recording with them or even starting or practicing their musical interest with this group. They started to get requests to play at other locations and so they came up with a name about six years ago. “What About Us” plays selections of country folk, sixties rock, and ballads from all times as well as their own originals. A handful of lively, faithful groupies as well as neighbours come to listen, joke and laugh, raise a glass, and join in with maracas, tambourines, sticks, and anything to beat or shake to the rhythm. The celebratory booming and tinkling escapes the room and rolls out and around the hilltop area. The endurance of the gathering is proof of the talent for, and love of music as well as the tolerance by the neighbourhood. There are several other independent music events held in leased spaces, community halls, living rooms, old barns, outdoor tents, and great rooms all organized by the different pockets of residents of Mill Bay. In addition to the “What About Us” Friday get-togethers in the music room up on the hill, we have the third Saturday blues gig at the old Sylvania school; classics, jazz and more at Pine Lodge Farm’s Toad Hall; various music styles at Shady Grove at the home of Peter Sussman; and there is a good mix at the Sylvan United Church. How wonderful to have this much music from many different people. Go find some!

Liquor LicenseNone, All Ages or Provide your own
Rentable / Hosts Outside EventsNo 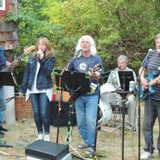