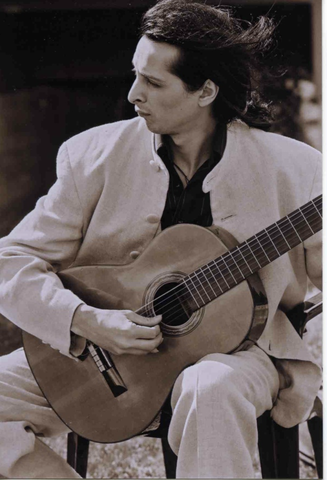 Massimo Pintus, guitarist, teacher, and instrument maker, says: “We are made of music. Music makes us.” One look at his story will tell you where his conviction comes from.

When Massimo was a five-year-old boy in Sardinia (an Italian island in the Tyrrhenian Sea west of the “boot”) his teenaged uncle used to play guitar. Encouraged by their grandfather, one day he was playing a romanza – an anonymous, traditional Spanish piece – and it hit little Massimo like a wave. He did not immediately pick up a tiny guitar. However, the seed that was planted by that wave of music must have taken root, because in his young adulthood, he turned to a guitar for orientation, self-knowledge, and survival.

When he moved to England at the age of 19, Massimo taught himself to play as a way of expressing his being in a place where the language was, as yet, a mystery. Having left all friends and the known universe behind, he immersed himself in a hungry self-taught study, and his playing advanced quickly. Using the beautiful record collection in the family, which contained everything from Led Zeppelin and David Bowie to classical music, he taught himself how to read tablature notation showing instrument fingering rather than musical pitches). Massimo soon was making music with a band (including a son of Ringo Starr). When he left it after a few years, he found himself in a dilemma: what to do without a band? Music had become a calling without a replacement, and adventures followed. Inspirations led him to Spain to learn flamenco, and beyond.

He soon returned to England to study music, but rather than pursuing this in an institution, he ended up charting his own course into the spiritual and esoteric qualities of music. Massimo feasted and explored in the libraries of London and spent every free moment playing and listening.

These explorations led to music improvisation in groups, and his abiding passion for “social music”. He became a regular host of improv sessions and came to see musical improvisation – play and invention – as a way to discover deeper levels of awareness in oneself, and furthermore as a way to deeply communicate with others. A beautiful thread of the universal qualities of music ran though his community and experience at this time. The beginnings of music therapy were happening around him, and he took advantage of the multicultural spectrum of music in London. Indian music, Sufi music – every colour of music – was being explored, and it all was clearly related.

Massimo met a composer named Par Ahlbom while using his tailoring skills to create costumes for a theatrical production. This man spoke Massimo’s language: he brought new instruments to play with and a robust musical appetite. They toured Europe together for six years, playing all “new music instruments” as a group called Gahun. (Massimo says that just tuning up was a musical education.)

After a long-term residence in Sweden, growing a beautiful family, and much more musical learning, Massimo has settled in Duncan and converted guitar instruction, Werbeck singing, instrument and sound-sculpture crafting, and sound healing into a rich vocation.