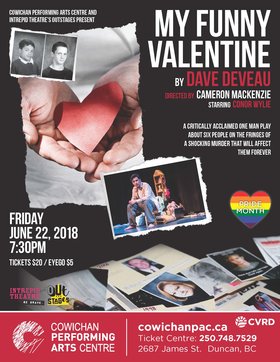 A death goes far beyond its immediate surroundings: it echoes through a community. On February 11, 2008, in California, 14-year-old Lawrence King asked his classmate Brandon McInerney to be his valentine. The next day, McInerney shot King twice in the head. After being declared brain-dead, but left on life support, King passed away on February 14, 2008 – Valentine’s Day.

From the headlines of this tragedy, Dave Deveau created his haunting, moving, and strangely comedic play that cracks open the greater humanity of a community trying to heal a wound. Presented as a series of monologues, My Funny Valentine is a critically acclaimed, Jessie-nominated, one-man play that enters the minds of seven people on the fringes of this shocking murder that will affect them forever. The audience is invited to search through the confusing and chaotic implications of this death to find their own humanity as the story explores the effects of hate and polarization in the wake of this horrible act and the ripple effect it has in its aftermath.

In a marathon performance, Conor Wylie ably inhabits each character over the course of 85 minutes, pausing only for breath or the occasional, rehearsed sip of water. Dressed in neutral jogging pants and an open button-down over a T-shirt, he uses a totem-like prop such as a notebook or a candy bar to channel each character, alternating between high camp and quiet earnestness, rage and helplessness.

Helen, who taught the dead student years prior, has become an advocate for changes in how schools navigate “problem” children;
Gloria was down the hall in another classroom when the gunshot went off, but will forever be branded as a student who went to “that school”;
Hal may have had online conversations with the young student prior to his death, and doesn’t want anyone to accuse him of anything unsavoury;
Rhonda has just received one of the dead boy’s organs;
Roger taught the boy, but doesn’t believe that his newfound martyrdom is called for;
Ray’s son had an altercation in a locker room with the boy, something which will never be solved in the wake of his death;
Bernard’s journalism career is catapulted forward by being the first on the scene, but he’s conflicted about prospering from the death.
Awards & Recognition

“Wylie plays every one of these characters with nuance, varying body language and physicality. He also has charm and a sense of danger.” – The Slotkin Letter

“The characters in My Funny Valentine were compelling and nuanced. Their distances from the action allowed what could have been a straightforward real-life horror story to unfold like a murder mystery, a whydunit where the answer will never make any sense” – Mark Leiren-Young, Vancouver Sun

“The play transports the audience through gales of laughter, moments of clarity, fits of rage, and places of aching, compassionate sorrow…. We are left questioning what can possibly be done to stop this from continuing to happen – a heartbreaking and relevant question in recent months.” – Brian Patterson, Laura Murray PR