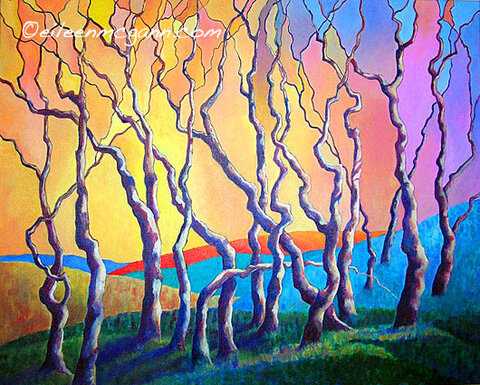 Eileen McGann, a long time resident of Mill Bay, BC, grew up in Ontario and lived briefly in England before moving to Calgary for a decade and then finally to her home on Vancouver Island. She spent her childhood summers camping and canoeing in the Canadian Shield, the Rockies, and hiking on woodland paths. This early experience of wilderness has shaped her music and her painting ever since, and both express her deep connection with the land and especially with trees.

She began painting and sketching the landscape while traveling as a touring singer and songwriter for three decades and, between tours, has studied privately and at the Victoria College of Art. As a musician, she has released seven top-rated CDs and has been nominated for a CFMA and a Juno award.

She has been a professional visual artist for two decades and now splits her time between art and music.

Eileen works en plein air and in studio in acrylic, pastel and watercolour. Her paintings are notable for their intense and beautiful colour, and expressively interpreted representations of Canada’s trees, mountains, lakes and oceans.

Her “stained glass” style portraits of local arbutus & Garry Oak trees are a trademark, and involve painting dozens of layers to achieve the glow and luminosity they display.

Eileen has exhibited her art in solo and group shows in BC and Alberta, and maintains a online gallery at her web site and now at her home gallery which opened in 2019. Her paintings appear in collections in B.C., Ontario, Quebec, Alberta, Oregon, Michigan, England, Scotland and France.

The Eileen McGann Songbook was published in 2011 by BerLen Music of Ontario, and includes dozens of her plein air sketches. In 2014, five of her paintings were published in the coffee table book Green Art: Trees, Leaves and Roots by Schiffer Publishing, USA.

Hours: Open during the Visions Studio Tour, various Studio Open Houses through the year, and by appointment. Come on by for a large display of original paintings, plus art cards, books and CDs!

No audio samples have been linked to this profile.
Available for paid gigs