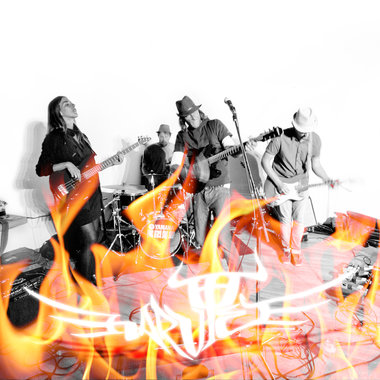 GARVIES was essentially, up until a few weeks ago, the pipe-dream of a musically untrained illegal immigrant surfer poet from 17 000 km away, turned reality here on the west coast of Vancouver Island. He was playing bass in a rock band called PARKLANE (Reverbnation.com/PARKLANEMUSIC) in Cape Town, South Africa when they got the call-up to play Canadian Music Week in Toronto 2009. They flew to Canada and played shows all over Ontario for 6 months, pretty much living in a van. Eventually the band split up & the boys went their separate ways but that guy didn't want to go back to South Africa and so he slipped first passed the expiration date of his visa, and then the date of his return flight flew passed, and so, through the cracks in the structures of Canadian society he fell... and survived under the table in the GTA on music, art and odd-jobs. Yet he yearned for the surf. After seeing Pete Devries in the barrel on Van Isle on the cover of Surfer magazine, the lights clicked on and he made his way to Tofino, got back into surfing. After running jam-night at Jacks Pub for about three years with Geoff Johnson and Nick Hill they met Carina Mach, and started up the band: GARVIES.

Well that guy just got his permanent residence here in Canada and if you don't know him yet, he is a surfer artist by the name of Daz Collins: lyricist, vocalist and rhythm-guitarist of the local originals rock-band GARVIES. His wife, Carina Collins (on bass and backing vocals), Geoff Johnson (lead guitars, live sound engineer) and Nick Hill (drums) form the official line-up but they are known to play as a trio with or without drums or lead guitar, or simply as a duo with only Daz and Carina, depending on the setting. Obviously rocking out in a quiet restaurant isn't quite appropriate so they morph their sound to fit the bill at each gig.

Their sound is rather unique. Daz has a tendency for the theatrical and with his mix of rhythmical word-play and hand-gestured spoken-word movements that turn languidly into soulful mellowness, he'll suddenly step up the rap-style reggae that flows eccentrically into the electric hard-rock that the rockers love, leaving them with the cheesy grin that cakes a crust on their face because they can hardly believe how amazing the bass is. She's Daz's wife, Carina: mega-trained, bass-schooled from Montreal to New York City, she's provided the precision bass for everyone who's anyone, from the Tofino & Ukee choirs to the Van Isle jazz cats to legendary local rock-covers band Ballistic Pig, whose frontman, Geoff Johnson, is also GARVIES lead-guitarist. The Ukee man with the sizzling solos is perhaps one of the very few people on the west coast of Canada to make a career entirely from music and "loves being able to focus only on his guitar sound in the band." The fourth member of GARVIES is Nick Hill, a surfer from Victoria with tons of groove who knows his way around reggae-town and is famous for his shirtless style of finishing off a live set.

The four members are good friends who know how to blend up a sweet sound to stir up the crowd. They will be playing again at Jamie's Rainforest Inn on Friday the 31st of August.

Check them out online with the provided links; you can listen to their audio productions on Reverbnation and SoundCloud, buy them on garvies.BandCamp.com if you like what you hear. Daz also has their self-produced record, "The Good Life" for $5 download on his art sales website: Etsy.com/ca/shop/GARVIES.

* GARVIES is a beach in Durban, South Africa where Daz grew up surfing.