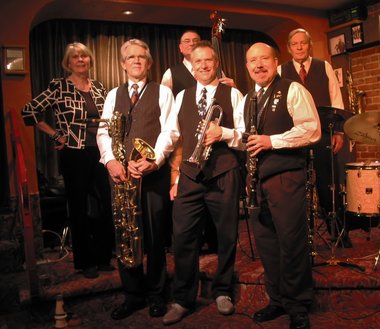 She’s been at it for 35 years, but Toni Blodgett’s love of jazz continues to fuel her band’s unique blend of what she calls “more traditional” music.
What it really means is her group has access to a vast repertoire of jazz tunes and has developed the ability to move seamlessly between Boswell Sisters arrangements to New Orleans Jazz and on to gospel, ragtime and pretty much any swinging jazz melody you can imagine.
Blodgett originally with the Dixieland Express Band for more than 10 years, but formed her own group, the CanUS Hot Jazz Band, in recognition of the fact she’d gathered the best talent she could find from both sides of the border. The band has played to critical acclaim throughout North America and at the 2003 Sun Valley Jazz Festival, where Blodgett was named the “First Lady of Jazz” in recognition of her talented representation of Boswell Sisters arrangements.
These days the group plays as regulars at Hermann’s Jazz Club (753 View St.) where they appear twice a month.
Originally formed as a quartet in 1991, the CanUS Hot Jazz Band travelled throughout the U.S., Mexico and Canada and in 2002 played to rave reviews at the Kennedy Centre for the Performing Arts Millennium Stage.
These days the band plays as a sextet, including Toni Blodgett on piano and vocals, Joey Smith on bass and vocals, Don Leppard on drums, Doug Rhodes on alto and soprano sax, and Tom Ackerman on sax and clarinet.
They blend tight group numbers with stunning individual performances to create a show where their sound meshes into a night of unforgettable music.
Although the band decided to stop touring in 2006, Blogett still considers the odd out of town gig.
“We played in Kelowna a while back and had a lot of fun playing to a packed house. It was fun, but these days a big consideration is whether we get to go home to our own beds,” said Blodgett with a laugh. “We’ve travelled enough for a lifetime.”
The group’s twice monthly gigs at Hermann’s are always a favourite and the family friendly venue is conducive to children joining their parents and grandparents to learn an appreciation of the music.
Blodgett said seeing a child on the dance floor, grooving to the tunes with their parents, is about the most satisfying aspect of her performances.
“I want to share tunes like Mississippi Rag, and Sit Right Down with a generation that maybe has never heard some of these great songs,” she said. “These are fabulous pieces and they can take your breath away given the chance.”
Tickets can be found at hermannsjazz.com.
Posted: Jun 25, 2016 Originally Published: Mar 11, 2016
In this Article Artist(s) CanUS Hot Jazz Band